Home » Top Restaurants To Try in 2018 in the Austin Area

Top Restaurants To Try in 2018 in the Austin Area

Did you make a resolution to try to new foods and restaurants in 2018?

Here is a list of defining eateries that will help make your dining decision a little easier.  These restaurants are in order from North to South Austin, so take a look and see if something new catches your eye. 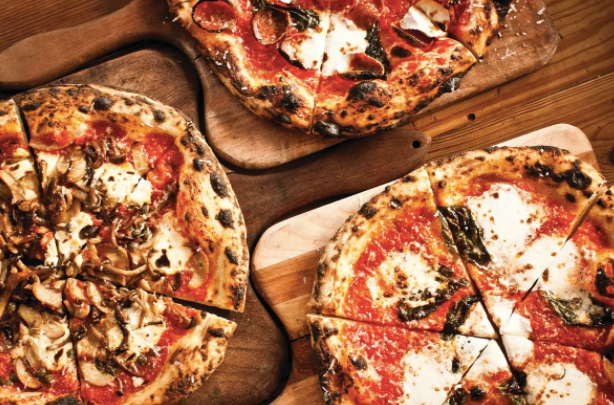 Chef Taylor Hall turned Spicewood into a fine dining destination with casual leanings with their New American restaurant, where the thoughtful dishes incorporate seasonal ingredients, including, of course, honey from the on-site hives. Take advantage of prix fixe or happy hour menus and pop into the casual next-door pizzeria, Pizzeria Sorellina, too.

Patrons line up for both locations of the ramen shop — the far north’s tiny strip mall spot and the larger South Lamar restaurant — before opening hours, on hot or cold days, for good reason. The staff is friendly, the space is buzzing, and the ramen is phenomenal. Along with the killer broths, don’t forgo the katsu sliders, hush piggies, and satisfying desserts.

For the finest Beijing duck, roast pork, and marinated meats, Din Ho’s Chinese barbecue is the answer in far north Austin in an easy-going setting with reasonable prices. Elsewhere on the menu, dive into other dishes like sea cucumbers with duck web and deep-fried intestines.

Biderman’s Deli brings much-needed sandwiches and bagels to the Northwest Hill. The Jewish delicatessen serves up classic bagels loaded with cream cheese, lox, whitefish, and more. Then there are the classic sandwiches, from the standout Reuben to the pastrami/corned beef/chopped liver combination during daytime and early evening hours.

Sarah McIntosh’s charming and well-executed cafe and grocery showcases what neighborhood dining should look like, with a New Orleans/French touch, in Rosedale. From the in-house cured meats to the grits reminiscent of risotto, Epicerie’s attention to detail elevates every item on its menu. The table service spot is great for a leisurely brunch or casual date night.

Take and Kayo Asazu turned their popular but now-defunct sushi trailer Sushi A-Go-Go into a full-blown restaurant, offering their take on home-style Japanese fare in the Hyde Park spot. It recently relocated just down the street into a larger space. Lunch is served teishoku-style (fixed menu with a dish, rice, and sides), and later on, there are shared plates for dinner. Most rolls run under $10.

Besides dishing out excellent and thoughtful Italian cuisine in Mueller (pasta to dry-aged meats to gelato), L’Oca d’Oro champions the rights and well-being of restaurant workers within its own restaurant, as well as throughout the industry. The restaurant pays fair wages (hospitality fees are included in all bills to help make this easier), offers paid sick days, and dubbed itself a sanctuary restaurant as a safe space for everyone.

Contigo’s minimalist beer garden is the perfect setting for its ranch-inspired menu, which heavily features housemade charcuterie and other meaty delights. It’s the perfect example of Austin in restaurant form found right in MLK. Venture down to East 6th Street sibling Chicon for indoor takes on Austin fare.

So regionally-minded that even the beer and wine are exclusively from Texas, Cherrywood’s Dai Due is equally satisfying for a light breakfast or a major blow-out meat fest at dinner. The brick and mortar incarnation is everything Austin hoped for from what used to be a hyper-local farmers’ market stand and supper club from chef Jesse Griffiths. The Texas-forever menu includes everything from heavier dishes like giant ribeyes, fried chicken, and wild boar confit, to lighter fare, like empanadas.

Cherrywood’s Manor Road has become a culinary destination, and the classics found in the area are definitely worth exploring. Few restaurants do neighborhood Tex-Mex with more warmth than Mi Madre’s. Indulge in the massive spread of migas or some killer enchiladas.

Chef/owner Elaine Martin’s longtime classic restaurant, which opened in 1988, was one of the first in Austin to take advantage of local farms (co-founder Dorsey Barger now runs Hausbar Urban Farm). This means Texas dishes made with fresh ingredients like smoked salmon ravioli, enchiladas, and pano-pecan chicken. The pies, especially the buttermilk one, aren’t to be missed, especially considering there’s an on-site pie shop, Elaine’s, too.

Restaurateur Larry McGuire’ and chef/partner Tom Moorman’s brought new life into the refined dining room of classic restaurant Jeffrey’s in 2011. Diners can expect to either spend half a paycheck or opt for an affordable meal of pork chops and souffles at the elegant bar (See also: Monday’s all-night happy hour). The valets will park a ’99 Corolla with as much panache as a Mercedes, so why not risk getting a little fancy? A visit to next-door effortlessly stylish sister restaurant, Josephine House, with bright brunch-inspired dishes and rejuvenating drinks, is worth a visit too.

Now back in business after a fire, Aaron Franklin’s smokey meats have risen from humble trailer origins to become one of the country’s most talked-about barbecue destinations. Yes, you will wait in line. Yes, it will be worth it. Weekend waits can stretch up to five to six hours these days, so consider ditching work for a weekday brisket fix instead. If brisket happens to run out, try the ribs and turkey.

Pitmaster Tom Micklethwait is diligent about making everything himself, which means his Central East Austin trailer rounds out the holy trinity of Austin’s smoked meats spots. Besides brisket, there are creative sausages.

This bake shop and beer garden nails the winning Austin formula: in-house bread and pastries, craft beer, outdoor games (hello, ping pong), and a friendly neighborhood atmosphere in the most improbable of places: Dirty Sixth. Make use of the massive outdoor area with giant pretzels and sausages in hand. It’s so popular that it is quickly expanding throughout Austin. There is an outpost within Whole Foods’ 365 Market in Cedar Park, plus new locations forthcoming in the Linc and the city’s first food hall, Fareground.

It’s all about Argentina at the fun and casual east side restaurant, where meat is the centerpiece, from grilled steaks, short ribs, chicken, to other South American specialities, like its take on Shepherd’s pie. Be sure to order some empanadas.

The butcher shop with a focus on responsibly-raised meats also offers a mean brunch and lots of meaty sandwiches. The dinner service is one of Austin’s terrific deals for high-quality charcuterie and steak on the outskirts of Holly.

Embrace the spirit of Austin institution Tamale House with the colorful east side restaurant, which is run by the fourth generation of the Vasquez family. The migas are plentiful, tamales galore, the patio is lush, and yes, there are cocktails and beer.

El Naranjo delivers the best taste of Oaxaca in Austin, thanks to chef Iliana de la Vega, who helms from the region. The Rainey Street restaurant focuses on upscale Mexican fare, with moles, chile rellenos, and other interior dishes.

Bufalina’s perfectly executed Neapolitan pizzeria has won the hearts and minds of diners around town right on East Cesar Chavez. Wine nerds will dig the unique and affordable bottles on offer as well. Check out the expanded second location out on Burnet too.

Excellent tacos are served from these trucks, served on handmade tortillas with fresh salsas. It’s not a real order without the migas, and don’t forget to try the aguas frescas. In addition to the original location, there are late night tacos at Radio Coffee & Beer down in south Austin, and brick-and-mortars in North Burnet and Round Rock.

Detroit-style pizza in a Texas-only craft beer bar? Hell yes. The brothers Hunt make some of the best pies in town. Craft Pride’s lovely patio is the right place to enjoy them because nothing is better than pizza and beer enjoyed outside. For other Via experiences, pair the pies with frozen Iron Whips from its second location at Violet Crown Social Club (which is set to relocate when its new East 6th Street brick-and-mortar opens), or head to the Oak Hill or north campusrestaurants.

For those looking to spend half a paycheck, this new-school sushi institution on South Lamar is the restaurant. Trust the server and don’t skimp on the more traditional sushi. The sake social hour (read: happy hour) is one of Austin’s fine dining’s greatest deals too. For expanded dishes beyond sushi, hop up to sibling restaurant Uchiko up in Rosedale.

From the grain-obsessed mind of executive chef and owner Kevin Fink comes Emmer & Rye, serving all-things local on a higher-end level, right on the edge of Rainey Street’s bar-packed district. Order from the menu, and grab whatever catches your fancy from the roaming dim sum-style carts filled with special dishes. Make sure to get the handmade pasta and knock-out desserts from pastry chef Tavel Bristol-Joseph.

Chef Lakana Trubiana cooks up a small but mighty Thai menu at the Holly food truck. The flavorful Isaan-style dishes range from the comforting om gai to the very spicy larb moo. When in season, the mango sticky rice is worth it.

The city boasts an embarrassment of world-class smokey meats, and La Barbecue gives Franklin a run for its money from its new brick and mortar home on East Cesar Chavez, within the Quickie Pickie. Predictably, the lines are running longer and longer — up to two hours on the weekends — but on weekdays, it’s still possible to have a casual lunch of world-class barbecue. Go for the brisket and sausages.

Texas meets Japan with the Lone Star-influenced izakaya from the Ramen Tatsu-ya team in Holly. The focus is on small plates and bites. There are fun dishes like a take on Frito pie made with octopus and hot pockets with brisket. Then there are expected fare with yakitori, sashimi, smoked meats including barbecue eel and fish collars, and, of course, ramen. Explore the funky choices of the exotic and rarities menu.

Justine’s menu of classic French fare with an east side twists makes for a neighborhood classic. Late night parties, secret musical performances, and art shows lend to the buzzy, magical atmosphere of the convivial space. Plus, the reasonably-priced wine list means this tucked-away gem is perfect for a long, lingering meal, which’ll have to include the steak frites.

From the superstar team of chefs Rene Ortiz and Laura Sawicki is Launderette, the stylish Mediterranean-influenced neighborhood cafe in Holly with a focus on all-day dining. This means more upscale takes on on the usuals, like toasts topped with crab, grilled prawns, and burgers served on challah. Don’t miss out on the birthday cake ice cream sandwich at the end, or even beginning.

Beloved by denizens of the 78704 and beyond, Bouldin Creek offers a diverse menu of vegetarian fare, locally roasted coffee, and a taste of old-school Austin during the daytime and evenings. The vegetable sandwiches are legitimately delicious.

The tiny taco cart on South First gets crowded quickly for good reason: the tacos are just that good. Fillings are simple, from breakfast tacos with eggs, cheese, sausages to barbacoa and carne asada during lunch. Remember, it’s cash-only

Great, reliable, locally sourced food in a mid-century building, Jack Allen’s is the casual suburban restaurant of your dreams out in Oak Hill. Hunker down with chicken-fried anything, from steak to beef ribs, and good ol’ pimento cheese. There are three other locations out on 360, West Anderson Lane, and Round Rock.

Pflugerville restaurant Taste of Ethiopia brought its array of African dishes to South Congress. Stews, spiced meats, and simmered vegetables are served on sharable injera, a round spongy bread. Go for the vegetarian sampler and wash it down with some honey wine.

Pitmaster Miguel Vidal melds the best of what Austin has to offer — smoked meats and tacos — down in far South Austin. There is a new brick-and-mortar to look forward to, but until then, head to the trailer for barbecue, tacos, and sandwiches, along with rotating specials like burgers, pastrami, and more. Don’t neglect the excellent breakfast tacos, especially the Real Deal Holyfield.