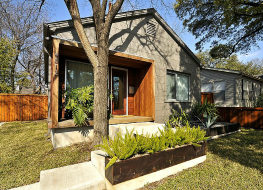 Hyde Park is an Austin neighborhood that is over 100 years old. Most lots within the neighborhood were improved between the late 1890’s and 1935. Houses built during that period reflect the architectural tastes, trends and patterns that prevailed in Austin at the time. Bungalows are the most common house type, followed by examples of the stylistic influences of the Queen Anne and Tudor Revival styles.

Hyde Park is defined by West 38th Street to the south, West 51st Street to the north, Duval Street to the east, and Guadalupe Street to the west. It is situated just north of The University of Texas and borders the neighborhoods of Hancock and North Loop.